Be sure to sing the Inchworm song made famous by Danny Kaye. For a craft, you could make these bookmark bookworms available at the Crayola Crayon’s website . 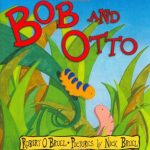 Bruel, Robert. BOB AND OTTO. Otto the worm is surprised to learn his best friend Bob is not a worm, he’s a caterpillar!

Caple, Kathy. WORM GETS A JOB. Worm needs money for paint supplies, so he tries a variety of jobs.

Cronin, Doreen. DIARY OF A WORM. A humorous story about the daily life of a worm.

Kaczman, James. A BIRD AND HIS WORM. A bird befriends a worm, and the two decide to walk South for the winter.

Lindgren, Barbro. A WORM’S TALE. Arthur makes friends with a worm he had accidently stepped on!

Pinczes, Elinor J. INCHWORM AND A HALF. A math story, where inchworms measure vegetables in the garden.

Edwards, Pamela Duncan. SOME SMUG SLUG. A slug learns to listen to advice from the other animals.

Marshall, James. THE GUEST. A moose welcomes a snail as a houseguest.

McGuirk, Leslie. SNAIL BOY. A boy takes a snail as a pet.