Although there are not many picture books about volcanoes, this topic can make a great science-themed storytime . Your audience would enjoy seeing a model of an erupting volcano – maybe you can borrow one from a local science fair student. For a hands-on project, make these playdoh volcanoes, or these tissue paper volcano posters. 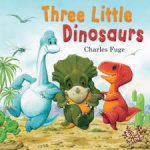 Fuge, Charles. THREE LITTLE DINOSAURS.    Three dinos want to fly, so they try to take off from the top of a volcano.

George, Jean C. DEAR KATIE, THE VOLCANO IS A GIRL.    Grandmother and Katie wonder if that noise is from a volcano, or from a Hawaiian goddess.

Lewis, Thomas P. HILL OF FIRE.    In this classic beginning reader based on a true story, a volcano in Mexico erupts and threatens a town.

Mandel, Peter. ZOO AH-CHOOOO.    After a succession of animal sneezes cause chaos at the zoo, a mud volcano erupts.