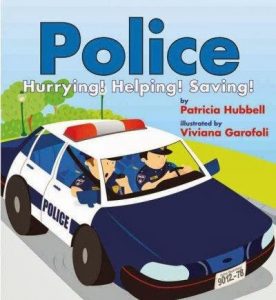 It is common in the primary grades to learn about community helpers, which usually includes firefighters, mail carriers, librarians, and police officers. Even preschoolers can learn about these occupations. For a craft activity for police officers, make police caps.  I made them out of paper instead of foam to save money, and that worked great. Also, you might host the police chief or other community outreach police staff member to read at storytime as a way for parents to meet someone from the police department.

Hamilton, K.R.  POLICE OFFICERS ON PATROL.  A rhyming text and cartoon illustrations show police in different situations, from traffic control to pursuit of a robber.

Hubbell, Patricia.  POLICE: HURRYING! HELPING! SAVING!   Action is the highlight of this colorful rhyming book that shows police officers, from the canine team to patrol officers.

McMahon, Kara.  POLICE OFFICERS!   Elmo rides along with two police officers to see how they do their jobs. This board book is illustrated with photos from TV’s “Sesame Street.”

Meadows, Michelle.  TRAFFIC PUPS.   A boy’s stuffed animals come to life and patrol the streets on motorcycles to keep the roads safe.

Niemann, Christoph.  THE POLICE CLOUD.   A small cloud dreams of being a police officer, but realizes he is not suited to the job.

Scarry, Richard.   RICHARD SCARRY’S DAY AT THE POLICE STATION.   Bridget accompanies her father to work at the police station.