Many preschoolers have visited an aquarium and are very interested in fish and ocean animals. Instead of a craft, you can play a game with numbered paper fish. Attach a paperclip to the paper fish, and use a simple rod and string fishing pole with a magnet on the end of the string. When the child “fishes” and catches a fish, he or she can win a prize according to the number on the fish.

A simple craft project can be a paper plate octopus. The plate is the octopus’s body; have the kids color and put on eyes, mouth, etc. Then they attach eight paper streamers to the plate for legs; this is a great counting activity. 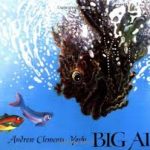 Clements, Andrew. BIG AL. Big Al the blowfish is teased for being ugly, but when he helps the other fish who are caught in a net, they see beyond his appearance to become friends.

Lionni, Leo. SWIMMY.    A little black fish has the solution to the problem of being prey for bigger fish.

Kranking, Kathleen. THE OCEAN IS.    Color photos and rhyming verse describe what is in the ocean.

Ward, Jennifer. SOMEWHERE IN THE OCEAN.    A counting book in rhyme, showing ocean creatures and their young.

Ward, Helen. OLD SHELL, NEW SHELL: A CORAL REEF TALE.    A hermit crab looks for a new, bigger shell. He encounters a variety of ocean life while on his search.

Ryan, Pamela Munoz. HELLO, OCEAN!    Using her five senses, a girl describes how she experiences the wonders of the ocean.

Pallota, Jerry. DORY STORY.    The ocean’s food chain is explained in this simple story of a boy’s imagination.

Oppel, Kenneth. PEG AND THE WHALE.    Peg is raised on a ship, and is a great fisherman. She sets her sights on catching a whale.

Kraus, Robert. HERMAN THE HELPER.    Herman the octopus is a great help to the other ocean creatures.

Cousins, Lucy. HOORAY FOR FISH.    Author of the “Maisy” series presents this large, brightly colored story of a fish who knows lots of ocean creatures.