Music as a theme for storytime should be done at least once a year; preschoolers really need the rhythm and repetition of music, plus it is fun! For a craft project, make tambourines by stapling two paper plates together that are filled with uncooked rice, beans, or popcorn. Of course, the kids can decorate the plates with brightly colored markers or streamers. If you have older children (ages 5-8), you could make rainsticks out of paper towel cardboard rolls. Fill the roll about half-full of uncooked rice, and put a “spiral” of aluminum foil in the roll. Be sure to cover the two ends with more foil. Turn it over to hear the rice “rain” down. Besides the music-themed picture books listed below, many songs have been turned into picture books, like “Over in the Meadow,” “Five Little Monkeys,” or “Wheels on the Bus,” so look for them!

Krosoczka, Jarrett. PUNK FARM. Old MacDonald is shocked to see that his animals have formed a punk rock band. 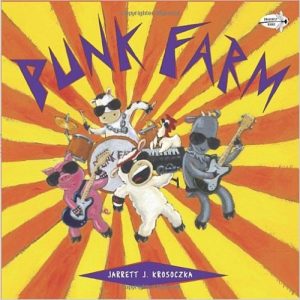 Kraus, Robert. MUSICAL MAX. Practice makes perfect! Max’s rehearsals annoy his neighbors, until he stops playing and the silence bothers them even more.

Yaccarino, Dan. OSWALD MAKES MUSIC. Inspired by a band they hear in the park, Oswald and his dog try to make music, but they don’t have instruments.

Lyon, George Ella. FIVE LIVE BONGOS. Five siblings use anything around the house to make music, from banging on pots and pans to things they find at the junk yard.

Pinkney, Brian. MAX FOUND TWO STICKS. A boy drums on buckets and other found objects instead of speaking, but his family knows what his music means.

Ziefert, Harriet. ANIMAL MUSIC. A picture book containing two stories: one is about an animal marching band, the other is about a farm animal dance band.