After preschoolers learn the days of the week, offer stories and activities that name the months of the year. They may not be able to name all the months in order by the time they get to Kindergarten, but it is fun to start the learning process, which they can continue at home. For a craft activity, make a Months of the Year word wheel, or make hats to go along with Katz’s Twelve Hats for Lena.

Barner, Bob. PARADE DAY: MARCHING THROUGH THE CALENDAR YEAR.    A different parade is held each month of the year in this informative rhyming story. Instructions on calendar making are included.

Blackstone, Stella. SKIP THROUGH THE SEASONS.    A short rhyme describes each month, while the audience looks for objects hidden in each illustration.

Carlstrom, Nancy White. HOW DO YOU SAY IT TODAY, JESSE BEAR?    Toddlers will relate to Jesse Bear’s various activities, tailored to the month. 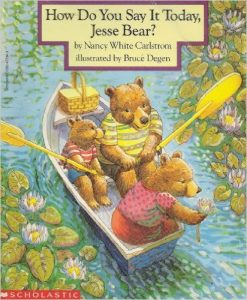 Cohn, Scotti. ONE WOLF HOWLS.    Counting and the months are depicted in this rhyming concept book that also informs listeners about wolves.

Day, Nancy Raines. A KITTEN’S YEAR.    A kitten grows into a cat, seen doing something different in each month.

Katz, Karen. TWELVE HATS FOR LENA.    Lena makes a different hat celebrating each month – for example, a straw hat covered in beach toys for August. Extend this charming book by decorating paper hats for each child’s birthday month as a craft project.

Martin, Bill. THE TURNING OF THE YEAR.    A rhyming text describes the weather and season for each month of the year.

Parenteau, Shirley. BEARS IN BEDS.    Big Brown bear tucks the four little bears into bed, but the howling wind gets them up to crowd into Big’s bed.

Sendak, Maurice. CHICKEN SOUP WITH RICE.    A humorous poem for each month of the year is matched with Sendak’s charming cartoon drawings.

Seven, John. A YEAR WITH FRIENDS.    Two friends do various activities suitable for each month, from playing in the snow, to playing at the beach, to wearing Halloween costumes.

Tanen, Sloane. COCO ALL YEAR ROUND.    A yellow chick celebrates each month in this funny rhyming story depicted with photo collage illustrations.