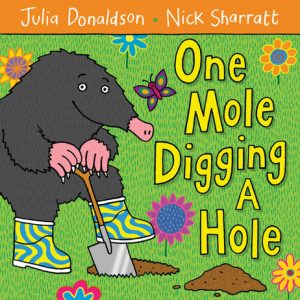 Several animals are known for “digging” – these include moles and gophers. There are many great picture books starring moles as main characters.  For an art project, make these simple rod puppets featuring a mole popping up from a cup.

Bedford, David.  MOLES’ BABIES.    Father mole wants to please his babies, so he imitates others animals.

Crimi, Carolyn.  ROCK ‘N’ ROLL MOLE.    Mole is a talented musician but has stage fright at the talent show.

Donaldson, Julia.  ONE MOLE DIGGING A HOLE.    Mole and other animals work in the garden in this counting book.

Emmett, Jonathan.  THE BEST GIFT OF ALL.    Mole misses his friend Rabbit so he tunnels to her home.

Emmett, Jonathan.  BRINGING DOWN THE MOON.    Mole thinks the moon is the most beautiful thing he has ever seen, so he wants to bring it home with him.

Fleming, Denise.  IN THE TALL, TALL GRASS.    A rhyming text and brilliantly colorful illustrations show what animals are in the grass, including moles.

Hillenbrand, Will.  KITE DAY: A BEAR AND MOLE STORY.    Bear and Mole build a kite, and try to fly it on a windy day.

Hillenbrand, Jane.  WHAT TREASURE!    Mole digs up useful things with his new shovel, and shares them with his friends.

McPhail, David.  MOLE MUSIC.    Mole takes up the violin, unaware of the animals above ground who can hear him play.

Newman, Marjorie.  MOLE AND THE BABY BIRD.    Mole rescues and cares for a baby bird.

Teckentrup, Britta.  HOW BIG IS THE WORLD?    A mole wants to find out how big the world is, so he travels the world visiting various animals.

Wheeler, Lisa.  ONE DARK NIGHT.    Mole and mouse travel one dark night, on their way to dinner at bear’s house.