Many fairy tales feature knights, but often these are too long for most preschool storytimes. Here are some tried and true storytime picture books featuring knights. For a craft project, you can make a knight’s coat of arms. Copy some shield shapes on cardstock, and let the kids color them. Add aluminum foil to make the shields look like metal.

Aitken, Amy. RUBY THE KNIGHT.    A young girl named Ruby imagines that she is a member of the Knights of the Round Table.

DePaola, Tomie. THE KNIGHT AND THE DRAGON.    A shy knight and equally nonconfrontational dragon must battle.

Funke, Cornelia. THE PRINCESS KNIGHT.    A princess decides to disguise herself as a knight to control her destiny.

Hazen, Barbara Shook. THE KNIGHT WHO WAS AFRAID OF THE DARK.    Sir Fred is afraid of the dark, which the castle bully tries to exploit to get even with Sir Fred.

Mayer, Mercer. THE BRAVEST KNIGHT.    A little boy imagines he is squire to a brave knight who fights dragons. 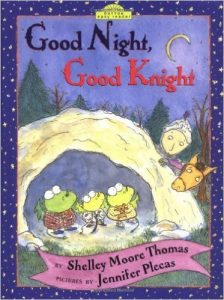 O’Connor, Jane. SIR SMALL AND THE DRAGONFLY.    In this easy reader, Sir Small must rescue Princess Teena from the dragonfly.

Ziefert, Harriet. NIGHT, KNIGHT.    Homonyms are the theme of this very easy book.