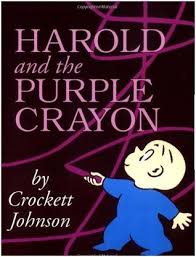 We are continuing our series of storytime themes that go along with the Be Creative @ Your Library summer reading program for 2009. To me, creativity can be many things, especially anything to do with fine arts or the imagination. This month, we will celebrate Painting and Imagination:

A main idea behind creativity is using one’s imagination. Even if a child is not artistic, or cannot hear the pitch in music, he or she can still use their imagination. For a craft project, the kids can make chalk drawings, like the character in Blackboard Bear by Martha Alexander. Or they can make a drawing using only purple crayons, like Crockett Johnson’s Harold and the Purple Crayon.

Johnson, Crockett. HAROLD AND THE PURPLE CRAYON. Harold makes magical things appear when he draws them with his purple crayon.

Schaefer, Carole Lexa. THE SQUIGGLE. A young girl uses her imagination to turn a red string into a tightrope, fireworks, and more.

McPhail, David. EDWARD AND THE PIRATES. Once he learns to read, Edward figures out he can use his imagination to take him anywhere.

Crews, Nina. YOU ARE HERE. A rainy day inspires two children to make a map and use their imaginations to travel.

Lillegard, Dee. SITTING IN MY BOX. In this cumulative tale, a boy is crowded in his box with several animals, when a flea jumps in.

Lee, Hector V. I HAD A HIPPOPOTAMUS. A boy imagines his box of animal crackers has some exotic creatures.

McLerran, Alice. ROXABOXEN. A group of friends turns a hillside filled with rocks into an imaginary town.

London, Jonathan. IF I HAD A HORSE. A child imagines riding a horse in unusual locations like the jungle, or on the moon.