Hippos are featured in several great picture books; something about them fascinates preschoolers. For an activity, you could obtain some “Hungry Hungry Hippo” tabletop games to play, make hippo paper bag puppets , or make one of these other simple paper crafts. 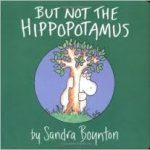 Boynton, Sandra. BUT NOT THE HIPPOPOTAMUS.    All the animals want to go out and play except the shy hippopotamus.

Boynton, Sandra. HIPPOS GO BERSERK!    A counting book about a hippo birthday party. Look for other Boynton books with hippos.

Brown, Marcia. HOW, HIPPO?    Little Hippo is separated from his mother for the first time and meets a scary crocodile.

Duvoisin, Roger. VERONICA ON PETUNIA’S FARM.    A hippo named Veronica arrives on Petunia’s farm, where her odd looks disturb the farm animals until the hippo gets sick.

Gannij, Joan. HIDDEN HIPPO.    Fabric collages illustrate this rhyming tale of the African grasslands, where children can look for the hippo hidden in each picture.

Hatkoff, Isabella. OWEN AND MZEE: THE TRUE STORY OF A REMARKABLE FRIENDSHIP.    Illustrated with color photos, this nonfiction book can be adapted for storytime, describing how a hippo is adopted by a tortoise after a tsunami.

Kraus, Robert. MUSICAL MAX.    Max loves to play a variety of musical instruments, but the neighbors complain about the noise.

Lester, Helen. HURTY FEELINGS.    An insecure hippo learns to take a compliment in this funny story.

Marshall, James. GEORGE AND MARTHA.    Two hippos star in this series of books, each with a few short chapters about their experiences as best friends.

Martin, Bill. THE HAPPY HIPPOPOTAMI.    The hippos enjoy a summer day at the beach; available in Big Book edition.

McKee, David. ELMER AND THE HIPPOS.    Elmer and his cousin help a group of hippos, whose river has dried up.

Parker, Nancy Winslow. LOVE FROM UNCLE CLYDE.    Uncle Clyde sends his nephew a hippo from Africa, including instructions on how to care for his new pet.

Raschka, Chris. THE BLUSHFUL HIPPOPOTAMUS.    Roosevelt the hippo is teased because he blushes a lot.

Thaler, Mike. WHAT CAN A HIPPOPOTAMUS BE?    What would be a good occupation for a hippo – cowboy, ballerina?

Wilson, Karma. HILDA MUST BE DANCING.    A hippo wakes everyone else with her boisterous dancing.

Ziefert, Harriet. HARRY GETS READY FOR SCHOOL.    Part of a series starring Harry the Hippo. In this book, he gets ready for the first day of school.