One whole storytime on bullying may be too heavy-handed, but you may have some teachers request the topic to go along with a program called Operation Respect. This anti-teasing educational program was started by Peter Yarrow (of Peter, Paul, and Mary). There is also a picture book, DON’T LAUGH AT ME, related to the program (thanks to Lucy Meinhardt for the information): 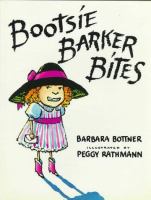 Seskin, Steve and Shamblin, Allen. DON’T LAUGH AT ME.   From Tricycle Press in Berkeley, this picture book version of the popular anti-teasing kids’ song comes with a CD, and is also seen on “Reading Rainbow.”

Berenstain, Stan and Jan. BERENSTAIN BEARS AND THE BULLY.   Tuffy beats up Sister Bear causing her to strike back. Sister learns of other ways to deal with bullies besides hitting back.

Bottner, Barbara. BOOTSIE BARKER BITES.   With expressive cartoon illustrations by Peggy Rathman, a little girl deals with guest Bootsie, who only wants to play games where she can bite.

Brown, Marc. ARTHUR’S APRIL FOOL.   Binky the school bully threatens to beat up Arthur, who is trying to practice as a magician for his upcoming show.

Browne, Anthony. WILLY THE CHAMP.   Mild-mannered chimp Willy proves he is a champ when the local bully shows up.

Carlson, Nancy. LOUDMOUTH GEORGE AND THE SIXTH-GRADE BULLY.   Harriet and George devise a plan to deal with an older bully.

Caseley, Judith. BULLY.   Mickey is afraid of the school bully Mack, until he tries being nice to him in hopes that friendship will keep Mack from being a bully.

Christelow, Eileen. JEROME CAMPS OUT.   Alligators Jerome and P.J. are excited about summer camp until bully Buster turns out to be their tentmate.

Cosby, Bill. THE MEANEST THING TO SAY.   A new boy in Little Bill’s class tries to get the kids to play a game where they say mean things.

DePaola, Tomie. OLIVER BUTTON IS A SISSY.   Based on DePaola’s childhood, Oliver is teased because he goes to dance class.

Lester, Helen. HOOWAY FOR WODNEY WAT.    Rodney’s speech impediment is the reason that he is teased, but soon he is the only one able to combat the class bully.

O’Neill, Alexis. THE RECESS QUEEN.   Mean Jean is the playground bully until a new girl challenges Jean’s status as the Recess Queen.

Peet, Bill. BIG BAD BRUCE.   Bruce the Bear bullies all the smaller animals until a witch deals with him.

Swope, Sam. THE ARABOOLIES OF LIBERTY STREET.   When the unusual Araboolies move in, the General, who controls Liberty Street, has to finally let people decide for themselves what color to paint their houses, etc.