Even young children have seen a magic show, probably at your library. For a craft project, make magician hats: www.crayola.com/crafts/whirl–twirl-party-hats-craft/. 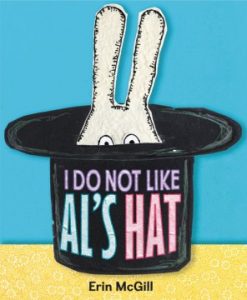 Cate, Annette. The Magic Rabbit.    Ray the magician becomes separated from his bunny in the big city.

Christelow, Eileen. Olive and the Magic Hat.    Olive and Otis play with their father’s top hat. Father thinks the hat is magic when he can hear it “talk.”

Grossman, Bill. My Little Sister Ate One Hare.    Dressed as a magician, a little girl enjoys eating snakes and other critters, until she “urps” when she must eat peas! A fun counting story.

Lester, Helen. The Wizard, the Fairy, and the Magic Chicken.    Three boastful magicians try to outdo each other, but they need to work together to undo the trouble they have caused.

McGill, Erin. I Do Not Like Al’s Hat. Herb the rabbit is tired of being pulled from the magician’s hat, so he looks for a new job.

Meddaugh, Susan. Cinderella’s Rat.    One of the rats that were turned into a coachman for Cinderella tells his side of the story.

Sperring, Mark. Max and the Won’t Go to Bed Show.    Max puts on a wild variety show, including magic, so he won’t have to go to bed.