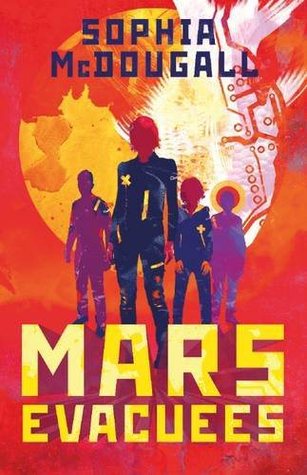 Narrated with entertainingly British self-deprecation and sangfroid by twelve-year-old Alice Dare, this intelligent and thought-provoking middle grade novel uses a science-fiction setting to mirror contemporary concerns. After Earth has been invaded, Alice and three hundred other kids are evacuated to Mars for safety. But when all the adults disappear from their base, the kids quickly form into warring factions, and Alice and her new friends, Filipino Australian brothers Carl and Noel, and Anglo African Josephine, are in the minority. Along with Goldfish, a hilariously self-important robot teacher, they decide to journey across unknown terrain to find another human base, using their ingenuity to “MacGyver” their way over obstacles and through alien attacks. Much of life on Mars and on the battle-torn Earth will be completely recognizable to 2015 kids: the main characters are beautifully drawn individuals, and their relationships with peers and family feel utterly authentic and familiar, while school hasn’t changed its essence one jot. Similarly, the central theme of Mars Evacuees is a futuristic twist on a current dilemma: how to react to the “other.” Should they be attacked or empathized with? This novel will have broad appeal, and the sequel, already published to great reviews in the U.K., will be eagerly awaited.