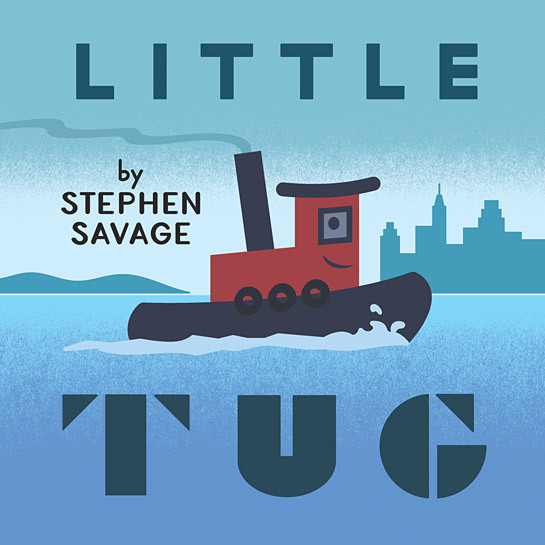 Savage, Stephen. Little Tug
Stephen Savage, Illus. Pic. Bk.
N. Porter/Roaring Brook, 2012. [32]p. $12.99
978-1-59643-648-0
OUTSTANDING GRADES TOD-PRE.
Though not the biggest, tallest or fastest boat in the harbor, anthropomorphized Little Tug still has an important role to play when the ocean liner can’t fit into the harbor, there isn’t any
wind for the sailboat, and the motorboat breaks down. What’s more, when the work is done, Little Tug’s helpfulness is rewarded when those he assisted during the day help to put him
to bed. Savage’s (Where’s Walrus?, Scholastic, 2011) latest is easy on young eyes with its limited, soothing color palette rendered primarily in shades of blue, drawing the reader’s eye in each spread to Little Tug, depicted in bright red. With solid, simple shapes set in graphic color blocks and one short phrase per page written in a large, basic font, this read-aloud friendly picture book could do double-duty as a beginning reader. Bay
Area kids who are growing up in a city on the water will feel at home among the bridges, city skyline, and boats of all shapes and sizes, and all will appreciate the messages of reciprocation for good deeds, and how even the smallest, and thus seemingly the weakest, have a role to play. For those young nautically oriented fans who aren’t quite ready for Hardie Gramatky’s (much more wordy) classic, Little Toot (Putnam, 1939), this is a simple, retro-tinted little gem that could easily work as a soothing bedtime story, with the backgrounds in the last few pages darkening to show the closing of the day.
Eric Barbus, San Francisco PL