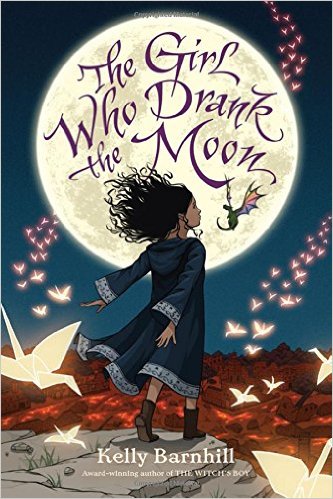 It is the annual practice of the Protectorate to leave the youngest child of the village in the woods as a sacrifice to appease a rumored witch who lives there, but that witch, Xan, actually rescues these children and delivers them to be raised in another town. One year it is Luna whom she saves, and she lets the young girl drink so much moonlight that it imbues her with magical powers, powers that Xan suppresses in Luna until her 13th birthday when she may be more ready to deal with them. Barnhill’s tight, thoroughly-realized fairy tale features a number of strong and determined characters including Luna, whose mission it is to find out who she is and where she came from; Antain, a young man whose mission is to find and expose the truth about the Protectorate; and a woman, deemed mad, whose mission is to prove her sanity and find the daughter that was taken from her. Side characters Glerk, a bog creature, and Fyrian, a minute dragon, ground the story and provide much needed comic relief, respectively, and, though the second quarter of the book stalls a bit, at midpoint it picks up steam again when a number of the seemingly disparate stories begin to intertwine and then doesn’t let up until the last page. There’s a cautionary message to be gleaned here about discovering what—or who—the real evil is when one is kept in the dark with regard to the truth, especially when it is used as a means of control. As Antain’s wife, Ethyne, says, “Knowledge is powerful, but it is a terrible power when it is hoarded and hidden. Today, knowledge is for everyone.”