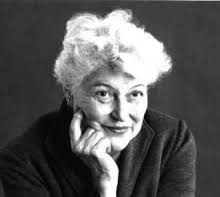 Author and editor Charlotte Zolotow died at age 98 on Tuesday, Nov. 19, 2013 at her home in New York. Zolotow was renowned for her many picture books (over 70 titles), including Mr. Rabbit and the Lovely Present, (1962), which earned Maurice Sendak a Caldecott Honor. Her first book, The Park Book, was published in 1944, and illustrated by H.A. Rey, the artist behind Curious George.  Often her books dealt with serious subjects, including My Grandson Lew (1974), about a grandfather’s death, and William’s Doll, (1972), about a boy who wants to play with a doll despite his father’s disapproval. William’s Doll was turned into a song, featured on the groundbreaking children’s album, “Free to Be… You and Me” by Marlo Thomas.

Zolotow later became an editor at HarperCollins, with her own imprint, Chalotte Zolotow Books. One of her books as an editor was Sarah, Plain and Tall, (1985), which earned the author Patricia MacLachlan a Newbery Medal.  She is survived by her son Stephen, and daughter, Crescent Dragonwagon, who is also a children’s picture book author (Alligator Arrived With Apples, (1987), and Home Place, (1993).

Review of the Week

Franceschelli, Christopher. Alphablock . Peskimo, Illus. Pic. Bk. Abrams/Appleseed, 2013. [112]p. PB $16.95. 978-1-4197-0936-4 OUTSTANDING. GRADES TOD-K.
An alphabet book and guessing game in one, this is a perfect board book for toddlers. A die-cut page features the letter with space for the reader to peek through to the illustration on the next page. Readers guess what A stands for while looking at something that is red with a stem—is it an apple? Even young children can guess most of the items—balloons, cookies, and various animals, household items, and things in nature. Only Yacht for the Y seems out of the ordinary. At first glance, adults may feel that the item for each letter is too familiar—these are things seen in many other alphabet books. But the idea is for very young children to guess the item, so choosing a more exotic item would defeat the purpose. The die-cut alphabet pages will help kinesthetic learners—they can feel the shape of the letter in this chunky book. The full-color illustrations have a 1950s graphic quality that is distinctive and clearly show the items pictured. The only negative aspect is the small typeface used for the word for the item; choosing a slightly larger typeface would have made this easier for emergent readers.
Penny Peck, San Jose State Univ, SLIS