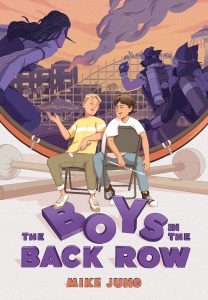 Best friends since fourth grade, Matt and Eric are sixth grade comic book fans and band geeks who play drums and sit togeth­er in the back row of band practice. As one of the few Asian kids at school, Matt is on the receiving end of racist taunts, and both boys get teased by a homophobic bully who possibly envies their close friendship. The tension builds as Matt and Eric plan a glorious and uncharacteristically rule-breaking epic adven­ture that may get them kicked out of band or even school. The many delights of this book include Matt and Eric’s witty and affectionate banter when they’re on their own and their well-timed comebacks when dealing with their relentless tormentors, complex characters who are humanized but not excused. This well-crafted middle-grade novel celebrates loyalty and humor, bravery and resistance, open-mindedness about gender expres­sion and sexuality, and letting one’s geek flag fly.

Bones: An Inside Look at the Animal Kingdom Review »
« Class Act Review