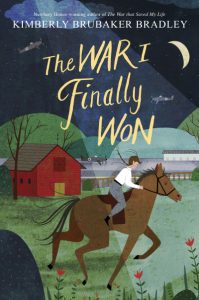 This sequel to the The War That Saved My Life (2005) finds 12-year-old Ada still struggling with the horrors of her child­hood trapped in an East London flat with her sadistic and bit­ter mother even though she has been evacuated to the country and found a permanent home with Susan, a serious but loving guardian, and a family in the Thortons, wealthy members of the English gentry. The book begins in 1943, and Ada is in the hospital recovering from an operation that has straightened her club foot. Ada’s mother has died in a London bombing leav­ing Ada reeling with her jumbled feelings of loss, anger, and relief. At the same time, the successful operation on her foot begins Ada’s recovery from her past. Events related to the war, including a friendship with Ruth, a Jewish refugee, her deepen­ing friendship with Maggie Thorton, and the death in combat of Maggie’s beloved older brother change Ada’s worldview and strengthen her fragile trust and love of those around her. The war is not over yet, and readers will surely relish another sequel to this endearing story.

When the Snow Falls Review »
« Schomburg: The Man Who Built a Library Review