There are many classic stories involving foxes, enough to make a storytime! Here are some ideas I found on the PUBYAC listserv, with some of my own ideas added: 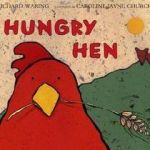 Edwards, Pamela Duncan.  FOUR FAMISHED FOXES AND FOSDYKE. Combining a great lesson on the letter “F” with a funny story, this is a new take on the “fox in the hen house” story.

Williams, Sue.  DINNERTIME! One by one, six little rabbits escape a fox.

Hindley, Judy.  DO LIKE A DUCK DOES. Mother duck tricks the fox into imitating a duck.

Aylesworth, Jim.  GINGERBREAD MAN. The classic story of the cookie who thought he could out-fox a fox, kids will chant along with the famous phrase.

Fox, Mem.  HATTIE AND THE FOX. Kids will repeat the exclamations made by each animal in this cumulative story.  Available in a Big Book edition.

Waring, Richard.  HUNGRY HEN. A hungry fox patiently waits for a hen to plump up, until the hen is bigger than the fox!

Janovitz, Marilyn.  LITTLE FOX. Little Fox breaks the family’s favorite chair; the one where Mom reads stories to him.

Ehlert, Lois.  MOON ROPE.    With text in Spanish and English, this Peruvian folktale involves a mole and a fox trying to climp a rope up to the moon.

Kasza, Keiko.  MY LUCKY DAY. A fox thinks it is his lucky day when a pig visits, until the pig tricks him into making him a meal, giving him a massage, etc.

Hogrogian, Nonny.  ONE FINE DAY. Based on an Armenian folktale, this cumulative story shows a fox trading for various items, so he can reclaim his tail.

Church, Caroline. ONE SMART GOOSE. A smart goose bathes in the mud so the fox cannot see his white feathers in the moonlight.

Ward, Helen.  ROOSTER AND THE FOX. Adapted from “The Canterbury Tales,” a proud rooster is tricked by a sly fox.

Westwood, Jennifer.  GOING TO SQUINTIM’S: A FOXY FOLK TALE. Based on the English folktale, this repetitive, humorous story involves a fox “trading” up from a bee to a boy that the fox hopes to eat.

If you’re looking for a unique craft, make fox tails. Cut out on tagboard and punch a hole in the upper end. Let the kids color. Then thread yarn through & tie the tails on the kids. Use this with ONE FINE DAY.

“Fox Went Out on a Chilly Night”