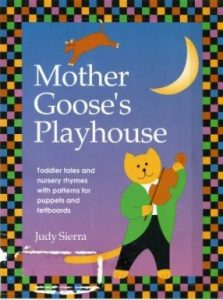 Here’s a list of great books that can be made into flannel board figures.  Our favorite book on how to make a flannel board and use them in storytime is out of print, but you can try to see if it can be borrowed from another library if you don’t have a copy: Mother Goose’s Playhouse: Toddler Tales and Nursery Rhymes, with Patterns for Puppets and Feltboards by Judy Sierra, Folkprint, 1994. Flannel boards are an “old fashioned” but sure-fire way to liven up storytimes, especially toddler time or lapsit. Here is a list of popular picture books that adapt well to the Flannel Board format.