Every month, we post an annotated bibliography of books that were rated ‘Outstanding’ and nominated for our Distinguished List at our previous month’s meeting. Members can see full reviews of these books and many more in the September edition of BayViews.

A Dance Like Starlight: One Ballerina’s Dream by Kristy Dempsey; illustrated by Floyd Cooper
Philomel, 2014.
Wishing on stars to become a ballerina, a young African American girl growing up in Harlem solidifies her dreams when she sees the “first colored prima ballerina”, Janet Collins, perform at the Met. Lyrical writing and masterful art immerses us into soft pinks, yellows and browns, giving the feel of looking at old photographs. (Preschool to Grade 3)

Viking, 2014.
On her second birthday, Sophie wakes up in a contrary mood, and is not happy with any presents from her family. ”I know someone who has turned the corner onto Grumpy Street,” said Mama. Granny comes to the rescue. Colorful illustrations in ink, watercolor, and gouache provide subtle humor and a comfortable, family feeling. (Baby/toddler)

Poppy the Pirate Dog’s New Shipmate by Liz Kessler; illustrated by Mike Phillips
Candlewick, 2014.
Poppy the Pirate Dog is lonely, with her family either in school or at work. When she hears that she is going to have a new “shipmate”, she looks forward to another dog. But when a spunky orange kitten turns up instead, it takes a few mishaps before the two become friends. The story is charmingly and humorously told. (Grades 1- 3)

Holiday House, 2014.
In this third book of a mystery series, Hunter, his twin, and their neighbor, try to find a hidden treasure trove. The dry humorous style of the author, and the absurd situations that are created all through the book, will make children wish they could be part of this slapstick comedic story.

Silver People: Voices from the Panama Canal by Margarita Engle
Houghton Mifflin Harcourt, 2014.
The blatant racism and horrific conditions surrounding the monstrous undertaking of the construction of the Panama Canal is told through the voices of a variety of characters, including the local flora and fauna, in this eloquent, yet devastating, free-verse novel. (Grades 6 – 9)

Houghton Mifflin Harcourt, 2013.
Alison Lester’s story of her 2005 trip to Antarctica on an icebreaker is told in the exuberant voice of 9-year-old Sophie Scott and illustrated with Lester’s typically cheerful drawings, some of her own photographs from the trip and fascinating hand-drawn maps and diagrams. (Grades 2 – 5)

The Swap by Megan Shull
Katherine Tegen, 2014.
Ellie and Jack switch bodies for a weekend, during which they learn much about the other gender and how to be true to themselves. (Grades 6 – 9)

The Whispering Skull by Jonathan Stroud

Disney Hyperion, 2014.
Maverick psychic detectives, Lockwood & Co., attempt to track down an evilly powerful artifact. With a world and main characters already established in The Screaming Staircase (2013), Stroud has space for a more intricate plot and more nuanced character development in a triumphant second entry to this middle grade fantasy series. (Grades 5 – 8) 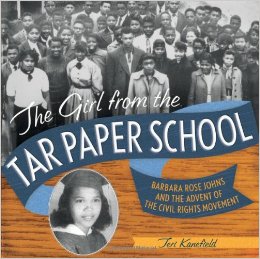 The Girl from the Tar Paper School: Barbara Rose Johns and the Advent of the Civil Rights Movement by Teri Kanefield
Abrams, 2014.
Strong research and writing, and fine photographic reproductions convey the little-known story of a high school junior, Barbara Rose Johns, who led her segregated high school classmates in a two-week boycott of their inadequate Prince Edward County, Virginia, school. This powerful narrative will appeal to young readers. (Grades 4 – 8)

Candlewick, 2014.
Wild Things! by three children’s book bloggers is filled with fun, almost gossip-like history and anecdotes about children’s authors and books, but is not mean-spirited. Topics covered include “subversive” children’s lit, GLBT authors and characters, books that attract censors, popular books that critics disliked, books by celebrities, and how money propels some aspects of publishing. (Adult)