Every month, we post an annotated bibliography of books that were rated ‘Outstanding’ and nominated for our Distinguished List at our previous month’s meeting. Members can see full reviews of these books and many more in the June edition of BayViews. 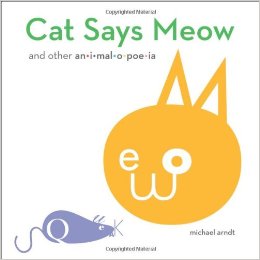 Cat Says Meow And Other Animalopoeia written and illustrated by Michael Arndt
Chronicle, 2014.
Inspired by animals and typography, Arndt presents a marvelous book whereby an animal’s sound is incorporated into its illustration. (Preschool – Kindergarten)

Dial, 2014.
Jane, a little white dog, belongs to a family of circus dogs who all have special talents except for her. The illustrations in this debut PB are a stand-out, conveying much of the humor as well as Jane’s winning personality, which is her most accomplished talent. (Preschool – Grade 2)

Picnic written and illustrated by John Burningham
Candlewick, 2014.
In this simple, straight-forward presentation, Boy and Girl head out for a picnic; on the way, they meet Sheep, Pig, and Duck and invite them along. As each animal loses something along the way, Burningham hides the lost things in plain sight.   This fine book proves once again that one need not invent an entirely new story to make a wonderfully successful experience. (Baby/toddler – Grade 2)

Abrams, 2013.
In this delightful picture book, Walnut Creek author Rose offers a humorous look at an elementary school spelling bee, written in the cadence of Moore’s classic poem “Twas the Night Before Christmas.” The tense contest, message on the value of reading, and the humor combine to make this a great choice to read to classes. With colored pencil and gouache cartoon-style illustrations. (Grades 1 – 5)

Three Bears in a Boat written and illustrated by David Soman
Dial, 2014.
Three mischievous bears set off to find a blue seashell like the one they accidentally broke. Filled with sun-dappled seascapes and amusing fellow travelers above and below water, this is a stunningly beautiful adventure. (Preschool – Grade 1)

Candlewick, 2014.
Told in free verse, this debut novel is set in Guatemala in 1981, with some parts of the plot based on actual events. Carlos lives with his mother in a small town, but as conflict breaks out between the military and Communist rebels, she sends him to her mountain village for safety. An endnote describes some of the history covered in the story, and there is a glossary for Spanish terms. (Grades 6 – 10)

The Impossible Knife of Memory by Laurie Halse Anderson
Viking, 2014.
Anderson (Speak, Farrar, Straus and Giroux, 1999) is never afraid to tackle hot button issues, and Impossible Knife illuminates, through the story of a high school girl and her ex-army father, the shoddy treatment of veterans and their difficulty in re-assimilating into a world that is not full of threats, along with the fallout this has on their loved ones. (Grades 9 – 12)

HarperCollins, 2014.
Themes of social injustice, reconciliation and the past’s impact on the present, connect linked stories of fathers and children, in this thoughtful middle grade novel set in 1938 and 2014 in the mining town of Victory, Arizona. (Grades 6 – 8)

There Will Be Bears by Ryan Gebhart
Candlewick, 2014.
Despite his grandfather’s fragile health and the threat of a rampaging grizzly, 13-year-old Tyson accompanies “Gramps” on a hunting trip neither will ever forget. (Grades 6 – 9)

West of the Moon by Margi Preus

Amulet, 2014.
Hired out to a humpbacked goat-herder, thirteen year-old Astri vows to be stronger and meaner than he, so that she can survive her servitude, rescue her younger sister Greta and emigrate to America to rejoin their father. Preus’s masterful novel weaves together Norwegian folktales and a powerful story of a young girl’s heroic determination to do more than survive. (Grades 5 – 9)

The Pilot and the Little Prince: The Life of Antoine de Saint-Exupéry written and illustrated by Peter Sis
Farrar, Straus and Giroux, 2014.
In the latest picture book biography by Sis, he describes the life and career of French aviator and author Antoine de Saint-Exupéry, best known for The Little Prince (1943). The main text runs along the bottom of the illustrations; within the spreads there are spot illustrations captioned in small print with interesting facts. The stunning illustrations, which appear to be watercolors with ink details, are fanciful yet still convey much factual information. (Grades 2 – 5)

Anubis Speaks!: A Guide to the Afterlife by the Egyptian God of the Dead by Vicky Alvear Shecter;illustrated by Antoine Revoy

BMP/Highlights, 2013.
The jackal-headed god Anubis takes early readers on an opinionated tour of the Egyptian underworld. In between the blood, guts, snakes and ghoulish jokes, lots of accurate, precise, nuanced and compelling information about Egyptian practices and beliefs are conveyed. Both an excellent curricular resource and a fun recreational read, Anubis Speaks is an auspicious beginning to the new Secrets of the Ancient Gods series. (Grades 4 – 6)

The Story of Buildings: From the Pyramids to the Sydney Opera House and Beyond by Patrick Dillon; illustrated by Stephen Biesty
Candlewick, 2014.
Throughout the world we spend so much time in buildings, but may take this so for granted that we need The Story of Buildings to remind us of the origins and history of buildings not to mention their present states and looks to the future with some vital questions about ecological balance. (Grade 4 – Adult)